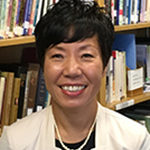 The Reverend Angie Lee was born and raised in Seoul, Korea. She is a graduate of Ewha Women's University (Bachelor of Science in Mathematics Education and Master of Arts in Old Testament Theology) in Seoul. She also received her Masters of Divinity in 2004 from United Theological Seminary in Dayton, Ohio. Pastor Lee was ordained as an elder in the Illinois Great Rivers Conference in 2009.

She is married to S. J. Lee, who is an auto mechanic. Together, they have two children. Christine is a graduate student at New York University and Alex attends Illinois State University. Their family's favorite hobby is traveling. In seeing the beauty of nature and meeting people, they are in awe of God's creation and His work among people. In her spare time, Pastor Angie enjoys exercise, such as yoga and going to the gym, as well as playing the piano and guitar.

Traditional: 9:00am
Contemporary: 11:15am
Web Design, Development, and SEO by

Web Design and Managed IT Services